Apparently cauliflower “rice” has been a thing for a while now, and I’ve known of its existence, but I never really believed cauliflower could replace rice effectively. I assumed it would still have a cauliflower taste – and in some dishes I suppose it might, which isn’t bad, because I love cauliflower – but in this one? Let’s just say my family had no clue this wasn’t rice until I told them so after they’d already devoured few bites! My oldest son was taken aback momentarily… not a cauliflower fan? But then he scarfed a bowl and asked for more. 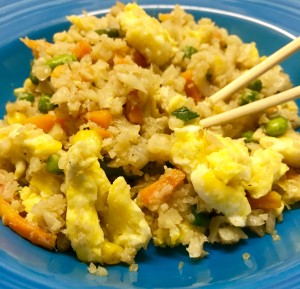 I’d searched for recipes for cauliflower fried rice and found a few, but decided to just have a go at it myself and create my own recipe after skimming guidelines. I wanted it to look and taste authentically like I’d just brought home high-end Chinese takeout, and I’m happy to say that’s just how it turned out!

If you’re not familiar with cauliflower rice or “caulirice”, it’s really simple to make:

You’ll need a head of cauliflower, preferably organic. Peel off the leaves and cut out the thick center “stem”. Break the florets into bite-size florets, then chop the stem into smaller pieces. Wash it, dry it as best you can, then toss it in a food processor, in batches if need be. Whiz it into rice-size bits and set aside. One head of cauliflower will make enough rice to do this recipe twice, so go ahead and put away half. It does well in just a Ziploc stored in the freezer. In fact, I used frozen cauliflower rice in this recipe.

You’ll need a large skillet for this. I used my giant cast iron skillet. You’ll also need a smaller pan to scramble eggs.

By the way, I purposely took photos to include the clock on my stove to show you what little time this takes. It would take even less time if you started with non-frozen ingredients.

Half a head of cauliflower “rice”

Avocado oil (or flavorless cooking oil of your choice)

Two cloves of chopped garlic, or two frozen crushed garlic cubes (got mine at Trader Joe’s)

Bragg Liquid Aminos (you can use soy sauce, as it tastes the same)

Scallions, half a bunch, chopped (optional, but preferable)

Add a couple of tablespoons of avocado oil to your skillet and turn it to high heat. 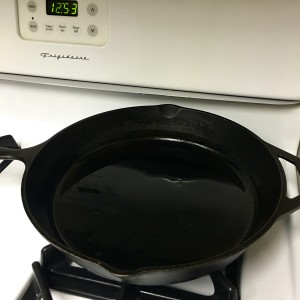 Add two or three large handfuls of your mixed veggies. There is no exact amount, so go with your preference. Add your half-onion and garlic. Let these cook for a few minutes until your onion goes translucent and your veggies are fairly well cooked. If you are using chicken or shrimp, add it now and mix it up. Push everything to one side of the pan, add a bit more oil to the empty side, and put your cauliflower rice in the other side of the pan.

Allow everything to brown just a bit on the bottom while you begin cooking your eggs. 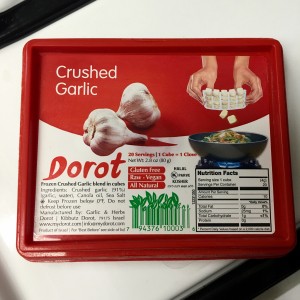 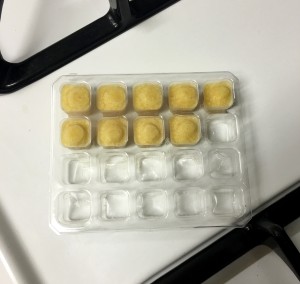 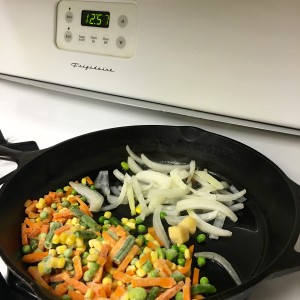 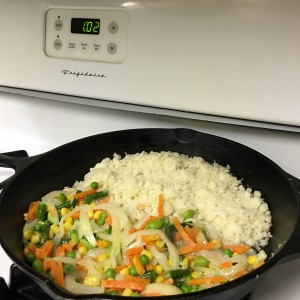 Scramble three eggs in a smaller pan on medium-low heat. While they’re cooking, go back to your rice pan and mix everything up, allowing everything to brown just a bit more on the bottom. Now finish scrambling your eggs and turn off that burner. 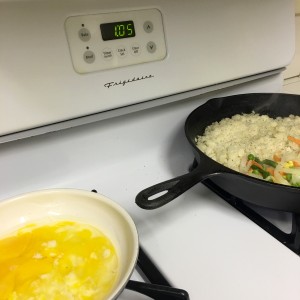 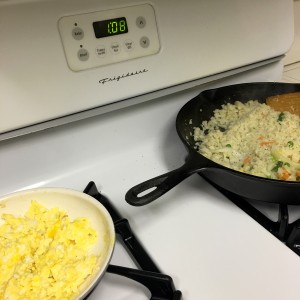 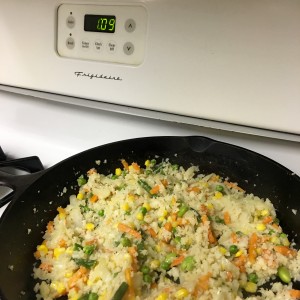 Toss in your scallions and scrambled eggs and mix it all up. 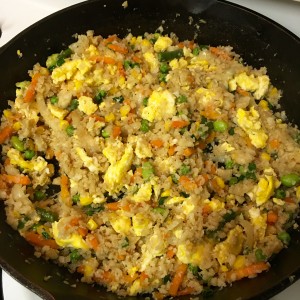 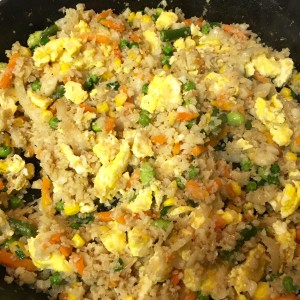 I forgot to take a last photo with the clock, but I assure you it only took another minute to stir it all up.

I have to say, in finality (clearly I want to keep writing), that when I’m eating this I have a weird sense of “food remorse” because my mind is convinced I’m loading up on simple carbs and I’m going to crash. It’s pretty weird. I have to keep reminding myself that this is all vegetables and protein, no crash, and that it’s okay to fill myself up and maybe even have seconds 🙂

Now go trick somebody with this, and let me know their reactions!