Freeganism is the practice of reclaiming and eating food that has been discarded. Freegans and freeganism are often seen as part of a wider anti-consumerist ideology, and freegans often employ a range of alternative living strategies based on limited participation in the conventional economy and minimal consumption of resources.

Note: Freeganism is also known as Urban Foraging and, in many cases, Dumpster Diving.

A post by Leslie Sholly, Too Much Stuff: An All-American Problem, got me thinking about how much stuff we really do have, and moreso, how much we spend on that stuff. I will admit right here that I totally suck at budgeting, and I’m also quite prone to impulse purchases. (Luckily, I’m also a thrift store enthusiast, so when I do impulse shop that’s commonly where it happens).

It’s where it usually happens that is my main problem: at the grocery store (and book stores, but we’re not going there right now). Because grocery store prices are ridiculous (can I get a hear, hear?). We have four human mouths to feed in this house, and eight non-human ones. Luckily the fish don’t eat much, but the cats? I’m about to impulse-buy them a side of beef and urge them to try to make it last until Thanksgiving.

I like to eat. My teenager REALLY likes to eat, and my pre-teen is showing signs of an oncoming growth spurt, evidenced by his sudden escalation in appetite. Going to the store to replenish supplies happens 2-3 times per week, which feels excessive; the time involved as well as the *money spent. And the aftermath is pure guilt and buyer’s remorse. Another admission? I’ve been known to cry on the way home from the grocery store, shell-shocked by that number at the end of the receipt.

Admission number three: I have considered trying the dumpster-diving freeganism thing to offset the cost of grocery shopping. It’s not about anti-consumerism for me, it’s about having more money to pay the bills. 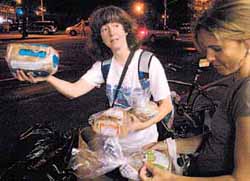 Admission number four? I have eaten a bag of chips I found in a dumpster. When the kids were smaller, and we were poorer than we are now, the husband and I were up for just about anything to make a few extra bucks. We bought a trailer and tried making a profit with cardboard recycling, and I’ll tell you right here that it was a complete waste of time, but the things we found when we scavenged dumpsters for used cardboard boxes intrigued us. For instance, did you know stores that sell home goods often discard boxes of dishes if just one dish in the package is broken? Same with other things. One broken piece, and off to the dumpster it goes (jewelry, lamps, furniture, rugs with small stains, cookware with broken handles, etc.). And quite often there is food, and a lot of it. I couldn’t imagine how a clean and sealed bag of chips with a distant expiration date could hurt me, so when I found one, I ate it.

But other food? While I may be fascinated by it, I don’t think I’d eat it, and I’d not serve it to my family. In retrospect, I probably shouldn’t have eaten that bag of chips, as it didn’t dawn on me at the time that it could have been a recall. There were other foods, as I mentioned. Behind a health food store there was an entire dumpster overflowing with single-serve organic fruit juices… you know, that stuff that costs $3-4 per bottle? The juices at the top all had expiration dates of the very next day. I assumed that’s why they were there, but it did dawn on me in this instance that there might be another reason. But if there wasn’t? What the hell? Why didn’t an expensive health food store that clearly cares about feeding people healthy things think to donate that to a food bank? Or a homeless shelter? Freegans get this, and they tend to share and donate surplus finds, mostly past-peak produce, which there is plenty of in dumpsters.

I really thinking this is more about waste and less about expiration dates, and I applaud freegans for their self-reliance and generosity. But me? No. I think I’m going to pass on freeganism for now. I know too much about food pathogens (I’m sure they do too, and take precautions), and I’m far too paranoid about bringing home illness (I once ended up in the hospital after what we think was fast food salmonella, and don’t take chances with things I have control over). Still, the fascination with scavenging and foraging persists.

What are your thoughts? Would you forage for discarded food for economic reasons? Would you do it as a show of anti-consumerism? How do you feel about freeganism? Does it fascinate you? Disgust you?

*Do you know I spent SEVEN DOLLARS on a pint of kimchi last night? I also bought ingredients to try to make my own giant batch, because the teenager devours it. You’ll see that food-blogged on Dolly Nomnom soon.