I woke up covered in cats. Normally I wouldn’t mind this, and late autumn is a pretty good time to awaken to extra warmth on your extremities, especially when it vibrates. But not today. Because? That little grey cat , Daenerys Stormborn: Kitten of Dragons (DeNayNay, for short), has maggots slithering out of her puckered little ass hole.

Daenerys has tapeworms, and it pisses me off. It seems like we just got finished treating Salem Barfolomeow Massoftwoshits (who is camera shy today) for butt-rice, and now we have to do this again, and probably threefold. I haven’t checked calamity Jane’s butt yet in fear of impulse regurgitation.

I am not happy. 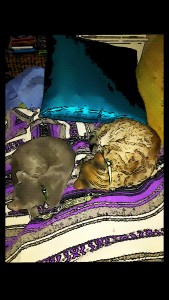 So after I dry-wept and threw up in my mouth and brushed my teeth, I made myself some Irish coffee. You know the kind. Screw Starbucks, I’ve got Bailey’s. Well, actually, I think it’s Carolan’s or O’Sullivan’s, but same difference. 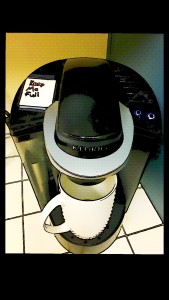 And I noticed this little jerk on my kitchen counter running off with a piece of goldfish flake. Normally I’d have smashed him to avoid his dragging this to his colony and bragging up his homies, “Yo! She got flake! C’mon, bitches! Let’s invade!”, but I actually think he’d kind of deserve the brag. He looked so totally awkward trying to carry this because it kept falling over or turning in weird directions when my breath caught it like a sail (oops). I felt like a meanie for troubling him and let him go. But I wiped up all the stray fish food so he’ll look like a fucking liar when his homies show up. 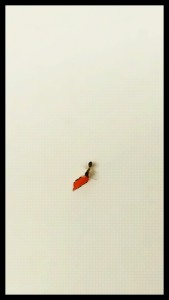 And I started to cook myself some breakfast. The kids are at school, the husband’s off driving a hearse somewhere, and for some weird reason I decided to photograph the steps of my breakfast ritual. Been photo’ing everything else today, so why not? This is my typical breakfast. I swap out veggies and meats depending on what I have on hand. 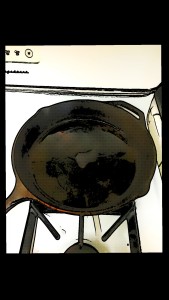 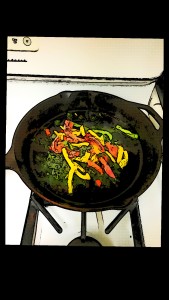 My typical seasonings: Sea salt, black pepper (always from a grinder, because pre-ground tastes like dust), garlic powder and turmeric. Sometimes I’ll add parsley and green onions from the garden, but I was too lazy to go pick it and rinse it. 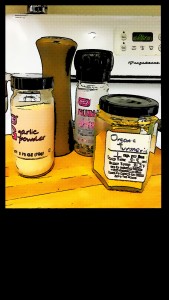 I chopped up a hot link and sexily posed the bits with two eggs. Why? I don’t know. The hot link went into the skillet with the veg. 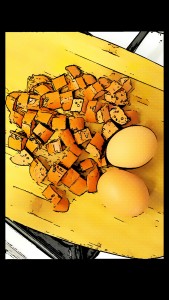 I whisked the two eggs with a bit of cold water (works better than milk) to fluff them up. 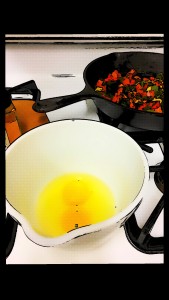 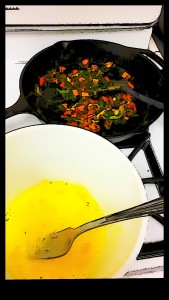 And I added them to my cooked veggies and sexy hot link bits. 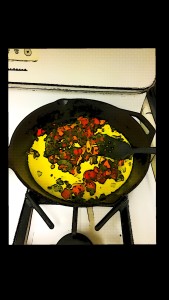 And scrambled it all to hell. 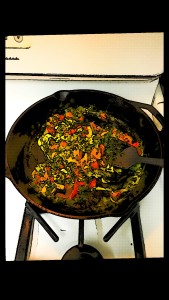 And I decided I needed something sweet to go with my sexy, so I whipped out the raw avocado honey and drizzled it over buttered sourdough toast, and… 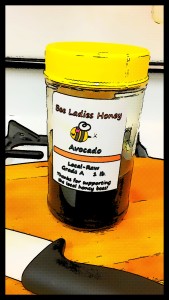 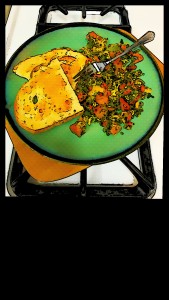 And as I was taking it to the living room to chow down on the couch (chow down on my breakfast, not the couch), I caught Wormbutt (autocorrect tried to make me write “wombat”. WTF?) about to fish for her own breakfast. I really need to get a cover for the fishtank. I considered nudging her to make her fall in… 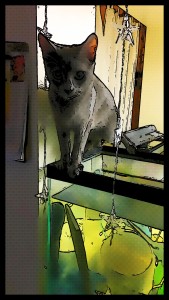 … but then the fish looked at me like this: 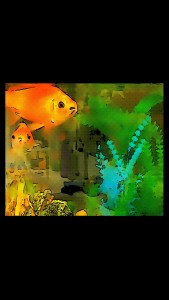 I ate my breakfast while reading a book, and became inspired to do some more KonMari, so I started going through a Rubbermaid bin full of disorganized photographs. And it was freakin overwhelming! And then I remembered that when doing the KonMari method of tidying you’re supposed to save the photos for last, so I quit. 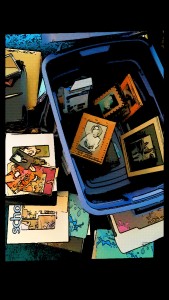 And I moved on to tidying a footlocker I’ve had since high school. I won’t tell you how long ago high school was because then you’ll know that I experienced the 80’s, which was a really embarrassing decade fashion-wise, and that I probably dressed in fluorescents and had giant hair before I rebelled and became the female version of The Cure’s Robert Smith. Oh shit, I hated the 80’s. Except for The Cure.

Anyway, here are some of the interesting things I found in there and didn’t purge along with some of the other interesting stuff (by the way, my 1980’s yearbooks were in there. I had the worst time not setting them on fire):

A Disneyland ticket from 1987. 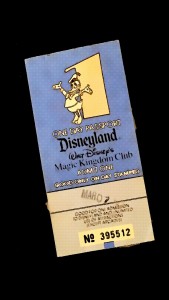 A Kodak Picture Disc camera. These lasted how long? About six months before nobody developed that kind of film anymore? Which fucking sucks, because two decades later I still have undeveloped discs that contain photos of one of my high school best friends. And he died at age 25. And I miss the shit out of him. Sam was a funny guy. He drove a little brown car covered in skater stickers. And I do mean covered. We used to drive that thing around while blasting Red Hot Chili Peppers and slapping his spare stickers on stop signs. And sometimes we were cruel. We’d drive around in the rain hitting puddles and splashing pedestrians, just like in the movies. Forgive. 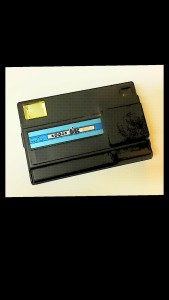 And I found these two campaign buttons that were printed before Monica Lewinsky learned how to sit up, crawl, or sit on her knees. 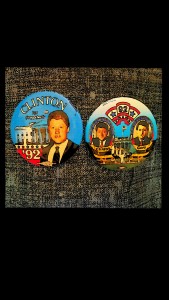 And this is what I got for being a creeper. Apparently, when a stranger knocks on Crispin Glover’s door all stalker-style, he invites them to his art shows. 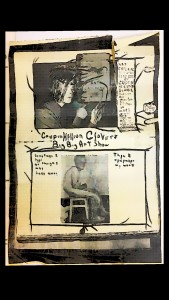 And I’m not really sure how these ended up in there, because I didn’t crochet them until 2006’ish. Yes, they are leaky boobs. I was on my way to becoming an extended nurser at the time, and all the crazy extended nursers had odd boob paraphernalia. I refused to be left out. They were never worn, as they’re toddler sized (as in they fit toddlers, not they’re as big as toddlers) and my kid was smart and wouldn’t have anything to do with boob hats, so I think I’mma eBay these. 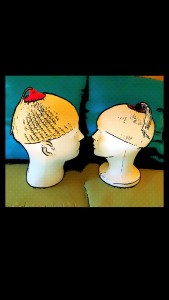 When I was done tidying for the day I wanted more coffee. But I was out of Irish cream, so I had to go to the store.

And on my way back I got stuck behind this asshole who was throwing fast food garbage out of his car. Yes, I snapped a photo while driving. Am ashamed. 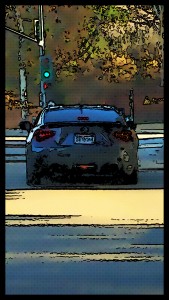 Then I wasted some brain cells and waited for the guys to get home. 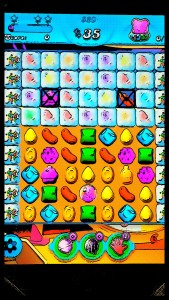 And I surprised Gadget with his very own Christmas tree in his freshly KonMari’d bedroom, and let him decorate it himself! 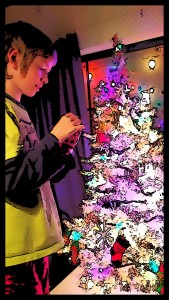 And I gazed out the window to catch the neighbor cheating and sneaking extra Christmas lights onto her fence. Note to self: Add more of own lights to start epic battle. 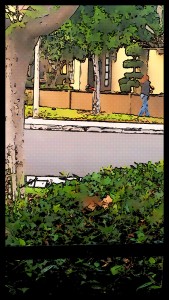 And I went out to the garage to find some more lights, and instead found Wormhole sleeping in a grocery bag full of trash, and no lights. I yelled “Ricehole!” at her and woke her up. Because I’m a grown up. 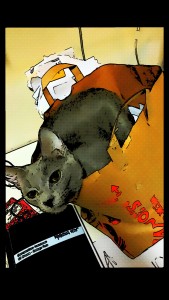 And then I was abducted by aliens for a few hours and wasn’t able to take any more photos until bedtime (either that, or it slipped my mind until bedtime).

This is pretty much my nightly bedtime ritual. First I fall asleep in my recliner while binge-watching a TV series. Right now that series is The Red Road because JASON MOMOA. MmmHmm. Then I wake up drooling on my shirt because JASON MOMOA, and Netflix is asking me “Do you wish to continue with this title?”. I consider more JASON MOMOA, but sleepiness gets the better of me, so I turn everything off and drag my tired ass down the hallway to my bed.

And when I get there I’m wide awake. Of course. So I grab a pile of books and rotate-read them until 4am, because that’s how I roll. I am physically and psychologically unable to read one book at a time. I think I may be ADD? Seriously, does anyone else do this? It takes me weeks to read a single book, because I’m reading four or five other books at the same time, switching them out based on my mood. 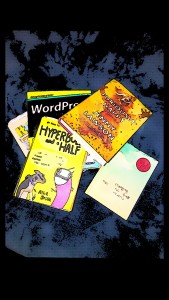 I hope you enjoyed my day in comics. I enjoyed posting it. It stemmed from my brand new obsession with (no, I’m not getting paid to say this, but I wish I was) an app called ComicBook! I downloaded from the App Store a couple of days ago. ICanNotStopMakingComicsWithAllOfMyPhotos. It’s getting ridiculous.

Should I turn this into a series?