I have disturbing photographic proof.

I was practicing some wound makeup on him for a course I’m creating about realistic casualty makeup. I digress from the “realistic” part in this photo, because I was experimenting with materials and didn’t do the tendon correctly. It still looks gross and hurty, but not realistic. Here it is…

And then he had to go to the grocery store.

I told him to leave it on and freak people out, but he was a wuss about it – or didn’t want anyone calling 911 – and peeled it off. I cannot adequately express my disappointment.

But at least he left me with a really cool disembodied (and hairless, except for maybe some hand hair that he ripped off with the latex) vagina… 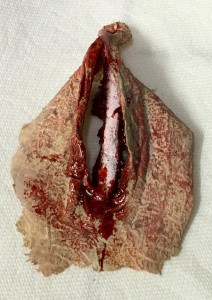 With a really thick string inside? A bone? Whatever. It’s horiffic, and I think I may use it to create a YouTube series ala Marble Hornets. Just gotta film someone finding this thing in the front yard and going, “Eeew! What the fudge IS this? A VAGINA?? WHO LOST THEIR VAGINA??”