Here’s your cute kitten post for the day. This is Daenerys Stormborn: Kitten of Dragons, and she is my mascot, even though she’s not made of cardboard.

I’d been trying to have my morning pee, and she wouldn’t let me be. She hopped up on my lap and sharpened her razor sharp claws on my bare and vulnerable thighs. I have holes now. When I tried to push her off? She got up in my face, nose to nose, and re-sharpened her claws on my boobs. More holes. Not cool, Daenerys.

Eventually I needed to wipe, and she wasn’t about to be banished to the floor, so she instead hopped up on the counter to watch me wipe (can I get some privacy around here?) and finally settled into the sink. Washing my hands was an adventure, as well. 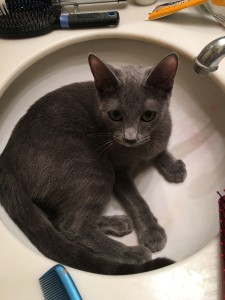 But enough of kittens now.

I think this blog might have to turn into even more of a variety show than it is already. The post I made last night about Aspergers has gotten a lot of reads, and if there’s that much interest it probably means that sharing my experiences on the momming of Aspies might help someone out there. The isolation of Aspergers is difficult, not just for those who are afflicted, but for those around them.

Aspergers moms generally don’t join play groups when their kids are small, unless they’re lucky enough to have a support group of other Aspie moms nearby. It’s too hard. You join a play group, head for the park to meet up, and while all the other moms are busily chatting away and making friends? You’re having to excuse yourself every three minutes to retrieve your child from wherever he’s isolated himself to plop him down near the other kids, hoping he’ll interact with one or two. Or you’re excusing yourself to chase him before he toddles into the busy street next to the park… because that ball that just rolled into the street? He follows it blindly, focused, not realizing he’s about to become roadkill. Or you’re excusing yourself to tend to yet another screaming meltdown that no one seems to know what triggered. Essentially, you have no time to talk to anyone or make any friends because your job is constant. And you’re lonely. And you give up on having a social life.

That was the first six years of my eldest son’s life. Two miscarriages later, I had another son, and I hoped it would be easier. Though he was born missing his left ear and ear canal (microtia/atresia), and we didn’t know what that meant,  there were good reasons to believe that he was neurotypical. Neurotypical to an Aspie mom means easy. He was a voracious nurser, latched right on and fed like a starving teenager. He bonded easily and was very social as a toddler. Except that he didn’t talk.

Specialists, speech therapy, and so on. You get the drift. I had another on the autistic spectrum. And it wasn’t easier, because once this one started school we found out he had a temper. Maybe I should backtrack and tell you that his brother did (and does), too, but the district schools were able to work with him (after we fought them for it) and help him to control it, and he’s now being mainstreamed.

They say when you meet someone with autism, you’ve met one person with autism, and sure as hell… these two kids are so very different. The older one has a hard time making friends because he’s withdrawn and shy around his peers. The younger one can easily talk to anyone, until they piss him off and he kicks them. And he doesn’t have that autistic lack of empathy. When he does something that hurts someone physically or emotionally, he stews on it, feels terrible about it, and he apologises.

I realize as I’m writing this out that it sounds terrible, and parts of it really are, but I should insert here that momming Aspies isn’t all nightmarish and horrible. They don’t tend to hit many of their baby milestones (speech, potty training, etc.) like other kids do, which further isolates them and you, but while they’re not hitting those milestones? They’re the two-year-olds who are drawing in perspective, finding the cheats in computer games, writing code, and solving the mysteries of the universe. And it’s brilliant and fascinating, and you wouldn’t trade it away for anything. And sometimes you pat yourself on the back for sucking it up and sacrificing a normal life and normal relationships for these kids, because you know they’re going to do something incredible to change the world. You keep telling yourself that, true or not. Let’s say true. Because it just might be.

I think it’s fair to say that Aspie mommers face crazy extremes: difficult-to-manage meltdowns one minute, off-the-charts brainy brilliance the next. I sometimes long for the neurotypical middle-of-the-road normalcy that I’m thinking is out there. I’m sure someone with neurotypical children will tell me there’s no such thing as normalcy. I’m glad to tell them they’re welcome to walk in my shoes for a day and then reevaluate their opinion. And I think I hear a chorus of spectrum moms singing Amen.

I’m not really sure where I’m going with this post anymore, so I’ll leave it here. I would really love to hear thoughts from other Aspie moms on how they deal, or have dealt, with social isolation… or if they even had to.