Onomatopoeia is the process of capturing sound effects in your writing. (In case you’re wondering, the word is pronounced onno-motto-pee-uh).

You know the words “cheep,” “chirp,” “meow” and “oink.” Onomatopoeia is very common with animal sounds; the words sound like what noises the critters make. Mechanical (vroom, honk, chug), and electrical (zap, fizz) are other examples. If you think about it, there are a lot more onomatopoetic words out there than you first realize, and in writing, they are particularly useful in conveying the sense of sound to the reader.

Advertisers sometimes use onomatopoeia to convey a message, and it sticks: “Plop, plop, fizz, fizz.” You already know what ad those descriptive words are associated with. 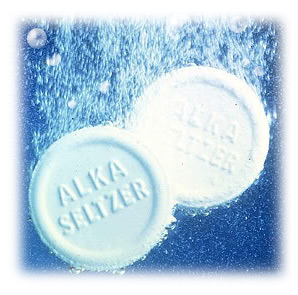 Now, there’s nothing to say you can’t invent descriptive words of your own. “Kerplink. Kerplunk. Drops from the leaky faucet drip noisily into the sink.” The one particular medium that employs onomatopoeia effectively are the comics. Cartoonist Roy Crane, creator of Captain Easy and Buz Sawyer, is credited as the first to employ onomatopoetic words in his strips: bam! pow! zap! Those words have since shown up in comics everywhere, and even into popular art (pop art), specifically Roy Lichtenstein’s comic-themed paintings.

I can’t end without bringing up one of my all-time favorite cartoonists, Don Martin of Mad Magazine fame. Characters with the bulbous noses and folded feet are uniquely his, as are the strange collection of made-up onomatopoetic words. Check out the one with the handsaw: if “FOINSAPP” doesn’t convey the wobble sound of a handsaw followed by the final slap, then no words can. (Did you notice I said “wobble”? Yet another example of onomatopoeia! It’s everywhere!) 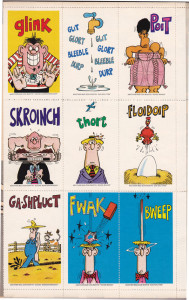 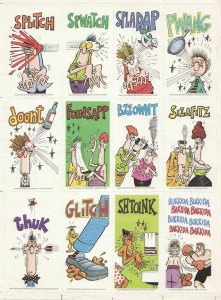 So, this homework assignment (yes, you get to do this again!) should be fun and easy. Picture a scene, and come up with a series of onomatopoetic words to describe various actions within the scene as you write. You can get creative and make up some as you go. If, perchance, you draw? *We’d love to see your onomatopoeia in comic form!

*This post co-written by Vincent of Outback Aspie. Go check out his autoblogography!