Garage cleaning is torture when you’re a . I resist the hoarder moniker, as it elicits negative and shameful connotations. You know how you feel disgust and pity when you see hoarders on TV so out-of-control they’re living in six inches of cat shit and decomposing rodents they didn’t even know existed underneath their mountains of disintegrating, putrid boxes filled with half-empty soup cans they didn’t want to waste?

Well, I’m not that. My family only lives in (okay, near) a quarter-inch of cat shit, and it’s all in or around the litter box. But sometimes I wonder if I’m just one or two emotional tragedies away from that trash mountain? Sometimes people turn. Like zombies. Right?

Mild hoarding runs in my family (I say “mild” because we’re not nearly as hoard-y as those TV shows). I don’t know how far it goes preceding my mother, but I know several of her children are “afflicted”. Is it contagious? Genetic? Did my Irish ancestors hoard potatoes? I’m not even sure Mom always had the bug; I don’t remember when I first noticed she couldn’t get rid of magazines and margarine and yogurt containers. Was it before dad died, or after? I do remember, after dad died, coming home from school and making sure the house was clean when she got home from work each day, and part of my cleaning was stacking those magazines in neat foot-high piles on the coffee table and in front of the fireplace. It drove me nuts that she couldn’t part with them. She thinks she acquired a need to keep things growing up in WWII and the Great Depression. She recalls things being hard to come by, so when you got something you kept it… no waste. She told me that often dessert was a bit of sugar rolled up in an iceberg lettuce leaf (tastier than you’d think for serious) because they couldn’t afford the luxury of anything else. And now she keeps jars of stuff in her fridge months or years beyond the expiration date, unused (her fridge is very clean, though – she’s a stickler for cleanliness), because it’s food and shouldn’t be wasted.

But now I can barely part with my magazines. I sort of get it now. When you get rid of a magazine you feel like you’re throwing away Incredibly Useful Information, information that will be lost to the world forever… even if there are 1.5 million other copies of those mags in circulation. Thank shit for the invention of the internet, and that all of that Incredibly Useful Information is now online, because that helped me ditch idon’tknowhowmanydozens of magazines I otherwise would have hung onto forever. I still have a problem with magazines; just not as insidious.

I said it runs in my family. My sister works in a grocery store and collects whatever is on sale or being disntinued. She had to add extra cabinets to her kitchen to contain the cans and boxes, unable to pass up a bargain. On the bright side, she’s prepared for a disaster should the stores run out of food. She also collects knick-knacks to which she has become attached to and sentimental about.

One of my brothers collects vinyl records. Thousands of them. He used to have a 6′ x 6′ oak bookcase in his dining room so full of vinyl albums that he ran out of space and had to start stacking some on top. His ex-wife couldn’t get rid of anything either. When they moved to Minnesota from California the family helped them pack. Most people employ a large moving van. They needed something closer to the size of a semi-truck. I remember standing in the kitchen with Deb going through kitchen junk and feeling frustrated that she couldn’t let go of even a scratched up plastic cup because it had memories attached. I remember how she couldn’t part with her paper bag collection. Just wow.

My youngest brother collects… maybe everything? Mostly plants though. And broken, but unique, bits of furniture he plans to resurrect and turn into something beautiful. And he keeps it all at Mom’s place in her back yard, and in her garage. I only just found out that, in addition to all the stuff at Mom’s, he has two… two!… storage units filled with stuff. I actually cannot confirm this, but it sounds about right.

I’d been feeling guilty, like I’m pushing my family into the corners with the stuff I collect; books (two overflowing bookcases, and most available surfaces), craft supplies (I’m an ADD crafter, or a craft-hopper, doing a little of everything, so I have tons of craft tools and supplies), and random mid-century modern furniture. My shit takes up a lot of space, and we have four people living in a small two-bedroom condo.

It wasn’t until we started doing a deep garage cleaning the other day that I realized I’m not the only one, and this isn’t just something that runs in my family. You could say my kids get it from me, but you could also say they get it from Vin… my revelation! I’d been unable to notice their hoards because I was too busy feeling shitty about my own. It was all I could see!

Vin and I dove into garage-cleaning like champs. Within two days our garage went from a space that couldn’t be walked though without shoving crap aside to clear a path and falling over stuff anyway to two-thirds less of that junk. And it was only because I started with one of Vin’s collections of stuff that I had that revelation. It took me two entire days to sort through the kids’ drawings he’d been collecting since they were toddlers (extremely prolific artists, both of them). I was under the impression he had maybe a Rubbermaid bin’s worth. Nope. It was three 10-gallon Rubbermaid bins and a few of my tears in that garage for those two days. And for those same two days? Vin spent almost the entirety of it sorting and shredding his own paperwork. A Lot Of Paperwork. As for why he kept so much of the kid’s drawings, he had a reason. He drew a lot as a kid himself, and nothing was kept, a fact he laments. He vowed he’d not let the kids’ art go the way his did… but I don’t think even he realized how prolific these kids would be.

And I began to look around the house, past my own stuff. Hmm… Eeth collects Nintendo games, Wimpy Kid books, and has more blankets than you can shake a stick at. His bed shall forevermore be known as Mt. Blanket. Gadget collects whatever obsesses him at any given time. Last year it was anything related to space… moon nightlight, piles of books and videos about the universe, solar system models. This year it’s drums. It’s all he talks about, and drums or drum kit parts are all he wants for Christmas. He longs to have a set like Neal Peart’s, which is ridiculously huge. He has a starter drum kit, and keeps adding to it anything that can be percussion; empty soup cans, 5-gallon plastic containers, cardboard boxes. And he’s been collecting rubber bouncy balls since he was a toddler. He has hundreds. 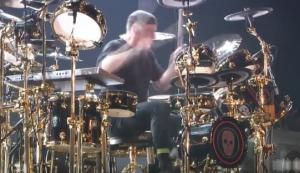 Vin? Aside from the papers and drawings, he’s unable to pass up DVDs/BluRays, especially if they’re Pixar. And computer parts… monitors, useless cords, old keyboards and mouses (mice?), old printers (Vin says, “To be fair, we all collect printers because they’re cheaper than buying replacement ink.” I say, “Naynay! Costco will refill those fuckers for nine bucks apiece!”). He has a thing for pens, always buying some new kind to try out. I’ve lost count of how many pairs of reading glasses he has, the non-prescription kind from the pharmacy and, clearly, he has to, as he keeps buying new ones to replace the ones he can’t find.

What IS this? What voids do we have that collecting giant amounts of stuff fills? Does it even have anything to do with voids? Maybe we just like being surrounded by things we like until it gets out of hand and we start tripping over it? DO WE NEED HELP? Or is this actually fairly normal in today’s society? Isn’t this the reason for the minimalist movement? People had Too Much Stuff? What do you think?

I bought a book. Marie Kondo’s The Life-Changing Magic of Tidying Up (this is an affiliate link) because I’ve heard this woman is a miracle-worker. I’m only partway through the book, and I’m wondering if she took crafters into consideration as she developed her program, or if I’m going to have to be a free-range chicken in that regard? I will let you know how it goes in a future post. I won’t be starting her program until sometime after Thanksgiving, but probably before Christmas. Choosing the right time to declutter is important, but tough, given the amount of stuff exchanging hands through the holiday season. Wish me luck? I wish us all luck, especially you who cannot scale your own Mt. Hoard.

This is also an affiliate link. You buy a book using the link, I smile.