Rena and I were driving home from a pub one night, through a nice neighborhood that wasn’t very well lit. She was sober (and driving), while I was tipsy, but still aware of the world around me, sort of. She reached down to change the CD (or was it a cassette? It was that long ago), and startled when I shouted at her to stop the car. There was a little cat in the road, and the cathole wasn’t going to move out of the way for us to drive by.

I got out of the car and tipsy-staggered over to the kitty to pick it up and move it, or take it home (my typical MO for strays), or shoo it away. I heard giggling. Looked around and didn’t see anyone. The giggling got more giggly. WTF? I looked down at the kitty and realized it was NOT a kitty. It was flippin’ cardboard. And I was drunk. 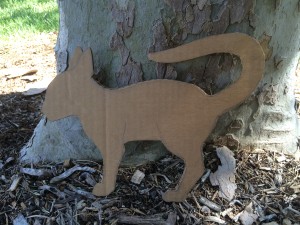